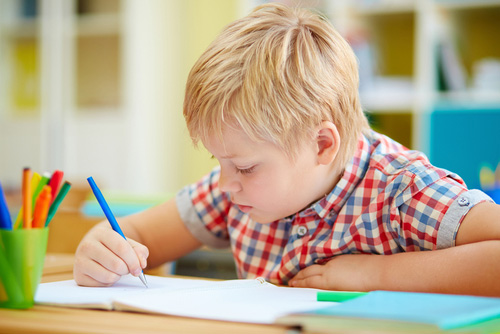 Pen Heaven’s “Handwriting Matters” campaign encourages people to “take a moment to put away their smartphone, laptop, or tablet and write by hand instead”. And, as someone who would have a very hard time without handwritten to do lists, grocery lists, and notes to self, I give two enthusiastic thumbs up to any person or organization that encourages writing by hand.

In support of the recently launched campaign, I thought I’d give you a short history of my experience with handwriting and share my belief that it does matter and will continue to matter, no matter how many electronic gadget there are.

Handwriting and I have had a rocky relationship over the years. It all started out well. I remember learning cursive in first grade and being completely fascinated by everything from the super cool, multi-chalk tool that the teacher used to make the practice lines on the chalkboard to the lovely and loopy letters that we were learning to make. The cursive capital “D” did and still does give me problems, but I’ve made my peace with it.

Over the next few years, my handwriting started to deteriorate and became ever smaller. Laziness? Boredom? I don’t know why it became worse or why I tried to write as small as I could, but I had several teachers tell me that, because I was left-handed, I was never going to have nice handwriting. So, I accepted my fate.

Thankfully, my sixth grade teacher, a fellow southpaw, explained to me that good handwriting wasn’t just for right-handed people. And I am ever grateful to him for that because he allowed me to believe that I, too, could have good handwriting.

Soon after, I began to enjoy handwriting again. My letters became larger and more legible, and I really got into writing everything in a puffy, balloon style which, while not necessarily practical OR legible, was a move in the right direction because I was having fun with letters!

I have to admit that I still don’t have the best handwriting, but the recent hand lettering craze has me hooked. I love playing around and practicing different lettering styles, and this practice has definitely helped my everyday handwriting, which I hope will continue to improve.

The current popularity of paper notebooks, notepads, and planners exemplifies the renewed interest in writing by hand, and it gives me hope that younger generations will continue to appreciate the practicality and tactile enjoyment that comes from picking up a pen or pencil and writing things down.

Does handwriting matter to you? Join the debate on Twitter #handwritingmatters.

Hope is in the Cards

One thought on “Handwriting Matters”