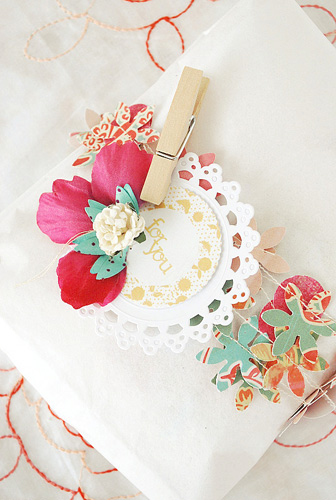 I’m so inspired by this wonderfully whimsical wrap from Tara Anderson, whose blog, The Pink Couch, is filled to the brim with so much eye candy that I’m feeling a bit giddy after going through some of her archives. Many lovely little things going on in this wrap, including a darling, mini clothespin, a darling, doily-ish gift tag, and a sewn paper garland that could be reused as a decoration. Tara also has a shop called With a Twist, which is filled with all sorts of lovely bits and bobs that you can use to put together your own whimsical gifts and crafts.

Alright, gals and guys, the stationery show is almost here, and my excitement for the show has been growing by the day. I still have much left to do before I leave for NYC on Sunday, and though I won’t be around for much of next week (I may pop in here and there if I get the the time), I’ll be scheduling some posts so you can get your paper cravings on while I’m gone. Have a great weekend, all, and see you back here late next week!