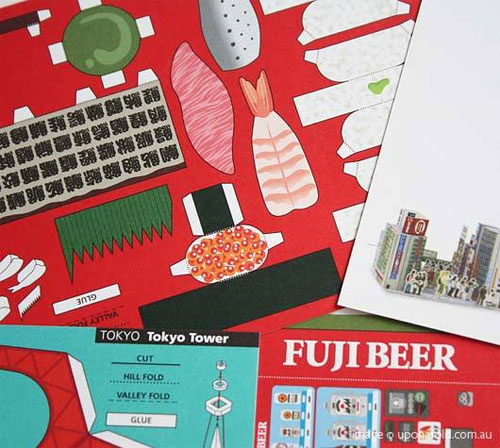 Words can’t really express what I’ve been feeling as I’m seeing the video and images coming from Japan over the days since a catastrophic earthquake hit the country late last week. Sadness mixed with hope, a sense that I’m watching something unreal as my mind is trying to process that all of this is really happening, positive thoughts for a country and culture that I greatly admire.

For the month of March, Justine from Upon a Fold will be donating all profits made from the sale of one of the shop’s most popular items, Make Tokyo City, to the Australian Red Cross’ Japan and Pacific Disaster Appeal. Make Tokyo City is a set of 5 postcards that capture the essence of Tokyo, and the icons featured on each postcard can be cut and assembled to create miniature models of Tokyo’s city icons. A very cool paper goodie for a great cause.

For those of us in the US, we can donate to the American Red Cross or the Salvation Army to help out, too.

In late February, Christchurch, New Zealand was also hit by a destructive earthquake that sadly affected many lives and destroyed architectural city icons, and Justine pointed out a couple of ways that you can donate to the earthquake relief efforts in that country, as well. The Li’l Quake Appeal from Li’l Magoolie is holding an online auction to benefit those affected by the NZ earthquake, and you can also make donations to the Christchurch Earthquake Appeal via the New Zealand Red Cross.

image from Upon a Fold

Upon a Fold on My Wishlist